If anyone ever offers to grant me three wishes, one of them is definitely going to be “to wake up happy.”  But not to worry–this isn’t going to be a self-indulgent whinge about being unhappy.  I’m often happy throughout the day.  I just don’t wake up happy, and I’m haunted by the idea that some, if not many, many people do.  If I knew that most people woke up with a slight feeling of dread, or a sense of being oppressed by their responsibilities, or a lack of conviction that they were really up to the task of what their life would require that day, I wouldn’t worry so much.  But my self-torturing fantasy is that other people wake up filled with energy, optimism, and excitement.  That they don’t feel like they need to step through some kind of frightening psychological curtain to get to normal, rational emotions like contentment and self-assurance. 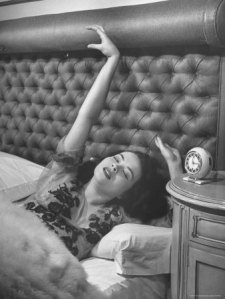 The last time I woke up happy was in Philadelphia in 1991; I was in graduate school, and I was napping on an old, turquoise blue Victorian style sofa that had belonged to my college roommate’s grandmother.  When I woke up, sometime in the late afternoon, I remember that extraordinary feeling of slowly surfacing into life.  That feeling like I had been somewhere else for a while.  I watched the movie G.I. Jane this week, and the way they wake up the military trainees is to throw these little grenades into the barracks and then scream really loud.  That’s sort of how I feel when I wake up now.

When I described my thoughts about how I should feel when I wake up to my mother, she said, “Do you actually know anyone like that?”  I don’t know people like that, but I’ve read about them, and I know they must be out there.  So I really, really need to know the answer to this question: Do you wake up happy?  If so, what is your secret?  Please, please share.  I’m not kidding.

The closest description I’ve found to how mornings feel is chapter 19 of Dr. Claire Weekes’ 1969 book, Hope and Help for Your Nerves.  It’s a wonderful book for anxious people (or, in her words, people with “nervous illness,” which I love, because it sounds so 1950s housewife-ish).  Every page is reassuring, true, and written in this lovely, wacky Australian English.  You feel like she would cure you of nervous illness by the sheer force of her will if she could (she makes a lot of emphatic, italicized statements).  Also, she advises that nervously ill people be sent away to special places to recover, places that sound a little like spas, which is quite nice.

Chapter 19 is called “That Dreaded Morning Feeling,” because, as she says, “Waking in the morning deserves special attention” since “it is the worst time of day to most people with nervous illness.”  Her advice is this: “You must rise as soon as you wake.  The longer you lie steeped in misery the harder it will be to pull yourself out of it.”  She suggests things like listening to music, having someone to talk to, or changing the position of your bed so that you see a new view once in a while.  Then she says, in italics, “A difficult morning need not mean a difficult day.”

This is my most favorite chapter of the whole book because I love phrases like “steeped in misery.”  But mostly I love it because it admits that you can, and indeed often will, feel quite unhappy in the mornings, but you can OVERCOME it.   I’ve read biochemical reasons for why people can feel worse, mood-wise, in the mornings, but that’s just science, and it can feel unchangeable, which is not helpful.  Claire Weekes is helpful because she believes in you: “Admittedly, the first half hour may feel deadly, and it is from this that most people shrink.  However, after a while the way becomes easier, helped by the prompt rising.  So don’t listen to any excuse you may make yourself to lie a little longer.  Leave that bed as soon as you wake.”

So I’ve tried several things to ease my way through that dreaded morning feeling:  praying; writing myself notes the night before that say “a difficult morning need not mean a difficult day;” taping inspirational quotes or song lyrics next to my bed; pretending not to be awake; scheduling things for early in the morning so I don’t have time to think about how much I don’t want to get up.  They don’t really work.

I’ve only found one thing that works.  One single thing.  It’s having done at least one worthwhile, useful thing the day before.  Preferably more than one, but one is enough.  Being able to remind myself that I lived my normal life just yesterday, and I did at least one good and meaningful thing is like a tiny beam of light through that jittery, cloudy morning place–it reminds me that I am me, that I can do real and good things like fold laundry, take my boys out for ice cream, cook dinner, go running, talk to a friend.  That I just did it, and so I can do it again.  And it will be fine.

I don’t think I’m going to be waking up like happy cartoon boy anytime soon, if ever.  I still wish I could.  And I also wish I could stop wishing that I could.

I hope you’ll share your own experiences with the mornings.  In the meantime, maybe try to listen to Lyle Lovett’s song, “Just the Morning.”  It’s a good one:  “Whisper to me that you know me/There’s nothing here to be afraid of/It’s just the morning.”  I know it’s a song to a lover, but whispering to yourself that you know who you are is pretty sweet too.

This being human is a guest house
Every morning a new arrival.
A joy, a depression, a meanness,
some momentary awareness comes
as an unexpected visitor.
Welcome and entertain them all!
Even if they are a crowd of sorrows,
who violently sweep your house
empty of its furniture,
still treat each guest honorably.
He may be clearing you out for some new delight.
The dark thought, the shame, the malice,
meet them at the door laughing,
and invite them in.
Be grateful for whoever comes,
because each has been sent
as a guide from beyond. 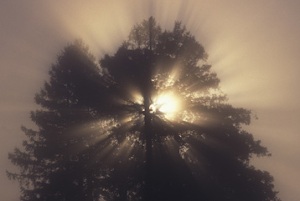 13 thoughts on ““Nothing here to be afraid of, it’s just the mornin'””