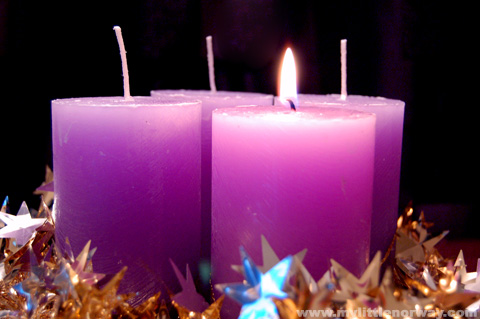 The title of this post sounds like it could be the name of a horror movie, doesn’t it?!  But hopefully by the end of the post it will make sense why I chose it.  Here’s some of what I’ve learned so far in my research about the meaning of Advent: historically, the primary sanctuary color of this church season is purple.  This is the color of penitence and fasting as well as the color of royalty to welcome “the Advent of the King.”  Purple is still used in some traditions (for example Roman Catholic).  The purple of Advent is also the color of suffering used during Lent and Holy Week.  Some articles I read say that this points to a connection between Jesus’ birth and death. The idea is that the nativity, the incarnation, cannot be separated from the crucifixion. One article said, “The purpose of Jesus’ coming into the world, of the ‘Word made flesh’ and dwelling among us, is to reveal God to the world through Jesus’ life, but also through his suffering, death, and resurrection.”  So even though I feel a little self-conscious about starting off on this slightly-too-churchy for me language, there are two things I love about this information…

The good news about this is that it means we can claim ALL of the events of our lives, everything that makes us who we are, not just the “good” or “acceptable” ones.  And they can all be used to make meaning, in whatever context makes sense to us.  Florida Scott-Maxwell said it much better than I can: “You need to claim the events in your life to make yourself yours. When you truly possess all you have been and done, which may take some time, you are fierce with reality.”  She also wrote that “It is not easy to be sure that being yourself is worth the trouble, but [we do know] it is our sacred duty.”

Winter is, I think, too often considered just as a season of waiting, of endurance.  Just like I think that when we experience dark times, we try to wish them away, or simply endure them.  Or, worse, when they reflect things about ourselves that we don’t want to own up to, we ignore them.  We don’t fully claim them.  We reject the humility of not being perfect.  I know I do.  I was talking with a friend once about feeling like I could not ask God’s forgiveness for something that I had done because I was certain that God would not want to forgive me; I was completely sure of it.  She just looked at me and said, “And what exactly is so special about you that you would be the one person in the world that God would decide not to forgive?”

Yes, Advent is a season of waiting, but the word itself is actually from the Latin adventus, and means coming.  We are waiting for something, not just enduring.  And we are not just waiting passively, but with hope and expectation, and if we are lucky, with grace, and patience, and humility.  Something is coming to us, for us, something extraordinary.  Wouldn’t it be miraculous to live like this every single day?

The second thing I love about that intro paragraph is the line “the Word became flesh” because 1) it reminds me of one of the greatest poems of all time by one of the greatest poets of all time, “The Word,” by Pablo Neruda.  And 2) it’s what happened to me, exactly five years ago today:  the baby that I wished for, whose name I said out loud before he was called into being, who was first a thought and then a word, became flesh.

Don’t worry–I won’t bore you with the labor story because it was exactly like and exactly unlike all other labor stories.  There was waiting, then pain, then blood, and then there was a baby.

And, like a blinding flash of the obvious, as I was writing this post, I thought, “Oh my God, isn’t that what this season is all about?”  Mary and her pregnancy, the waiting, the suffering, the blood and the baby.  We all know how that story ends–for that baby and for us–and yet we celebrate over and over and over, every year, with our candles and lights, and fires and warm hearts and offerings, because it is winter and we are cold, and we need each other to stay warm.  And alive.  And filled with hope.

The offerings we make to one another at this time of year are, as the poet Rumi said, our way to kneel and kiss the ground.  Our way to offer our gratitude for what we have.  But let’s not forget to give thanks for the trials and the failures too, the glory of the incarnation and the inevitability of the crucifixion.  Not to be morbid, but to be honest. To tell the truth about what it means to be human.

And also not just because remembering suffering helps us appreciate what we have, because honestly, how well does that really work in the long term?  When we found out last month that Gabe didn’t have bone cancer but just a really bad misalignment in his pelvis, how long do you think it took me to stop being grateful that he was healthy, and start bitching about having to drive him to the pediatric chiropractor three times a week?  About 2 days.

No.  We give thanks for the trials because suffering makes us humble, and humility is important.  It reminds us that we are human beings, and so are all the other people around us; they’re not just a cast of characters shipped in for our own personal life dramas. Also, if we are only okay with ourselves and others when things are okay and other people are acting just the way we want them too, then what are we going to do with the 50% of our lives when things don’t quite work that way?

I really struggled with what poem to end with today.  I was very tempted to use “The Word,” by Neruda, but frankly, that poem really kicks your butt, and it needs a lot of patience in order for it to let you in.  If you want to read it, though, you can click here.  It takes some work, but it’s beyond extraordinary.

So instead I chose this poem below by Robert Frost because I don’t think enough people read Robert Frost, and perhaps tend to be fooled by the rhyme scheme into thinking that a poem like this one is simple, but it’s not.  How can a poem that asks, “What is this talked-of mystery of birth/But being mounted bareback on the earth?” be simple??  And talk about an adventurous spirit!  “We are riders and guiders,” and though we hardly ever know what’s coming, in the last line, he declares the creative power of humanity:  “We have ideas yet that we haven’t tried.”  Yes!

Here’s to saying “yes” to whatever is coming!

The surest thing there is we are riders,
And though none too successful at it, guiders,
Through everything presented, land and tide
And now the very air, of what we ride.

There is our wildest mount—a headless horse.
But though it runs unbridled off its course,
And all our blandishments would seem defied,
We have ideas yet that we haven’t tried.

5 thoughts on “The Coming”