Sadly, I am currently without a car, which is a profound inconvenience.  Not really because of the obvious loss of something that makes my life easier and more workable, but because I am not in good standing with the State of Illinois with regard to my driving record.  No tickets or accidents for 10 years, then, wham!  A whole lot in a short period of time.  Gabe has become quite familiar with Mama having to talk to the police.  So the inconvenience is that a Bad Thing with regard to my license is hanging over my head, and it won’t be resolved until January.  Not the worst of Bad Things by any stretch, but something that makes my stomach clench from time to time.

The two small, connected cities where I live have what is supposed to be a very good public bus system, and if you are going from one well-populated place that is very close to another well-populated place, this holds true.  And they have nice, friendly drivers, and positive, happy slogans on the sides of the buses.  Slogans like, “It’s a great day to ride the MTD!”  and “Smile!  It’s sunny!”  But if you actually need to get places with the bus, it can be a bit of a problem.

For example, today Noah and I needed to do several errands that encompassed an area of approximately 1 square mile, and we took the bus (I should actually say buses).  All of the errands were close together in the downtown area and took about 10 minutes each.  We left the house at 11:25 and did not get home until 3:00 because of a variety of mishaps with the bus system.  Nothing was on time, and every bus seemed to be going in the opposite direction from what the schedule said. It was snowing.  The sidewalks looked like they had been plowed with a toothbrush.  And I had a blister from my Uggs.

Also, I was annoyed with Noah who, like all teenagers is magically immune to weather of any kind, and felt that 29 degrees was not cold enough for him to be wearing a warm coat, gloves or a head covering of any kind.  I’m not even going to mention his shoelaces.  At one point, as we were mountaineering over the side of the street to the sidewalk, I looked at him and said, “You know, this might be a good time for a prayer.”

But while it might sound like this post is going to be a big rant about the inconvenience of losing something that you took for granted, it’s not.  Because somewhere along the way of this 3 and a half hour journey, I started to realize that the world is filled with many tiny helpful things, things that you don’t pay any attention to when you are speeding along with your schedule, car, and sanity intact. 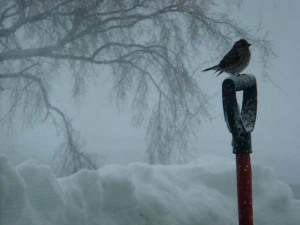 In fact, it began to feel as though life became less scary and frustrating the more I had to be immersed in it; somehow having to be completely present and paying attention to everything around me, having to be a real human being in the real world made me feel like I was in a relationship, and that my job was to step up and do my part, and this was fine.  It was okay.  I could handle that, because the world became less like something I just glanced at when I took the time to come out of my own head, and more like something I could take part in if I wanted.

The first tiny helpful thing that struck me was the walkers that they have in the library.  I didn’t need one–I was just looking at a picture of one while I was in the elevator.  “What a nice, helpful thing that is,” I thought.  “How good it would be to know that if I needed help moving around the library, a walker with a basket to put my books in would be available for me.”

Other tiny helpful things I experienced along the way:

The whole way home, I kept thinking about David Whyte’s poem, “Everything Is Waiting For You,” and especially the first line: “Your great mistake is to act the drama as if you were alone.”  It was the perfect poem for today.  Everything in it is so mundane, and yet so much of a reminder that “to feel abandoned is to deny the intimacy of your surroundings.”

In other words, folks, it’s up to us to be in relationship with the world.  And that is of course a double-edged sword because “everything” that is waiting for us means “everything.”  We don’t get to escape.  But we do get to choose relationship and participation, and when we do, we get things back that we never knew we were missing.

Everything Is Waiting For You
(After Derek Mahon)

Your great mistake is to act the drama
as if you were alone.  As if life
were a progressive and cunning crime
with no witness to the tiny hidden
transgressions.  To feel abandoned is to deny
the intimacy of your surroundings.  Surely,
even you, at times, have felt the grand array;
the swelling presence, and the chorus, crowding
out your solo voice.  You must note
the way the soap dish enables you,
or the window latch grants you freedom.
Alertness is the hidden discipline of familiarity.
The stairs are your mentor of things
to come, the doors have always been there
to frighten you and invite you,
and the tiny speaker in the phone
is your dream-ladder to divinity.

Put down the weight of your aloneness and ease into
the conversation.  The kettle is singing
even as it pours you a drink, the cooking pots
have left their arrogant aloofness and
seen the good in you at last.  All the birds
and creatures of the world are unutterably
themselves.  Everything is waiting for you.