Radical Lent—A Poetic Approach to 40 Days in the Wilderness

So it’s Lent.  If you’re Christian, that is. Lent spans 40 weekdays, beginning on Ash Wednesday (today) and ending the Saturday before Easter.  I grew up Catholic, which I consider a privilege, mostly because grounding in any faith tradition gives you something to work with.  Whether you practice it or not as an adult, a childhood spent in a strong religious tradition means you are never homeless.  I may be wrong, but leaving home, while difficult, may be easier than never having had the feeling that you belonged somewhere.

Lent has some beautiful theological significance, which you can read about if you are so inclined.  But one of Catholicism’s (Catholic school, specifically) greatest weaknesses is the inability to translate deeper spiritual practices into meaningful experiences for children, so what I remember about Lent is that you either give up something you like or do something that you don’t like.  Forgive me, but the spiritual gap between Jesus’ self-sacrifice and giving up chocolate (or, as my son Jacob decided when he was 8, beer) for 40 days is so enormous as to be absurd almost beyond words.

This year I have decided on a radical approach to Lent—I am going to do more of something I love and less of things I do not love. Specifically, I have committed to the discipline of reading one poem each day for 40 days, and writing about what it reveals.  This is not really radical, because my belief is that unlike the giving up beer approach to Lent, which treats us as if we are spiritual babies, this approach will bring me more into an adult-adult dialogue with myself and the world, which I believe is what God would prefer anyway.

Yesterday my husband and I had a meeting with our oldest son’s teacher, who, like my mother, is one of the teaching profession’s best of the best.  Our kids go to a Catholic school and this has also been a privilege, though not without some significant cost to us all, both literally and figuratively.  Our son Noah is, in his own words (of which he has plenty), a rebellious free-thinker, a weighty mantle for someone not quite 14.  This, combined with a frequently abrasive manner of speaking and an underdeveloped sense of initiative, has not endeared him to some of his teachers.

One of the decisions he has struggled with over the last year was whether or not to get confirmed.  At yesterday’s meeting, his teacher showed us a letter to a priest that he had written as an assignment for religion class.  In it, Noah asked for some advice on the confirmation issue.  His questions were well-stated and honestly meant, but his teacher didn’t send the letter because Noah had also written this: “Do you ever get bored?  I get bored before I even walk into church.  But that’s probably my fault because I don’t really even try to like it.”

She said didn’t send the letter because she didn’t want to offend the priest, whom she did not know. She was showing it to us as an example of Noah’s ability to express himself, and to take responsibility when he is wrong (wrong in this case being the failure to try to like going to Mass).  I understand her decision not to mail the letter.  I really do.  It’s not only that she worried about offending a priest, but she also didn’t want to risk making the school look bad, as if they were secretly churning out disrespectful, rebellious free-thinkers here in this little corner of the Diocese.  But I think it was wrong for two reasons: 1) she did not give the priest enough credit by assuming that he would take offense.  Frankly, any priest worth his salt should be able to answer the questions of an 8th-grader without undue distress, and if he can’t, well, how seriously do we take him? And 2) she demonstrated to Noah that asking questions makes you conspicuous, and that being conspicuous is dangerous.

This is quite true—being conspicuous is dangerous.  And the desire to protect children from attracting negative attention is not misplaced.  Noah’s teacher wants to help him “play the game,” to work the system to his advantage, because he is smart enough to do so.  A year ago, I would have agreed with her, and even now I love her for loving him enough to see him for who he is, and more importantly, who he can be.  But one thing I know for sure (in case Oprah ever asks me) is that it doesn’t matter how smart you are—if you get even a whiff of the message that who you really are is not okay with the world, if you hear even in a whisper that you have to play a game in order to make it through, your head will get it, but something in your heart will be bruised, and something in your soul will close its eyes and go to sleep.  And this a far more dangerous message to send to young people who need all the fierceness and courage they can get if they are going to forge real lives for themselves in this world of ours.

So Noah decided not to get confirmed this year, and we decided to find a priest to whom we can send his letter who can help him answer some of his questions.  Confirmation in the Catholic Church is about choice, and in the end it seemed absurd for me to force him to make the choice I wanted him to make.  The poem that I have chosen to offer today is an old stand-by, Mary Oliver’s “Wild Geese.”  Everyone should know this poem.  And Noah, this one goes out especially to you.

You do not have to be good.
You do not have to walk on your knees
for a hundred miles through the desert, repenting.
You only have to let the soft animal of your body
love what it loves.
Tell me about despair, yours, and I will tell you mine.
Meanwhile the world goes on.
Meanwhile the sun and the clear pebbles of the rain
are moving across the landscapes,
over the prairies and the deep trees,
the mountains and the rivers.
Meanwhile the wild geese, high in the clean blue air,
are heading home again.
Whoever you are, no matter how lonely,
the world offers itself to your imagination,
calls to you like the wild geese, harsh and exciting–
over and over announcing your place
in the family of things. 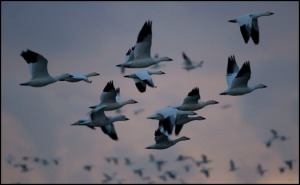