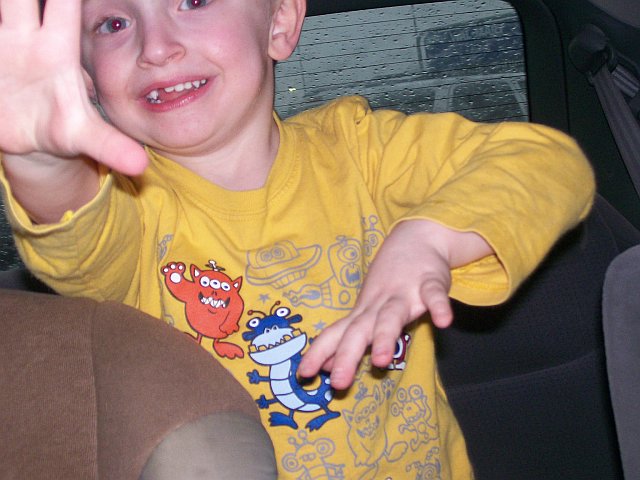 One of the funniest websites for all things parenting and pregnancy related is Let’s Panic! by the fabulous writers Alice Bradley and Eden Kennedy.  I wish I had created it, because it’s like they open their mouths and everyone’s voices come out, except 100 times funnier.  Here are some of their tips on “Alternatives to Yelling:”

While the whole site is fabulous, the part I like the best is the little quote box at the top that changes when you click from one page to another.  It says things like, “Remember: depression means you’re doing it wrong,” and “Too bad about your vagina.”  My current favorite is, “Say goodbye to your freedom and hello to a lifetime of thankless commitment.”

When we were on our 12 hour drive home from Niagara Falls, we stopped to get gas and junk food to boost morale.  Martin and Gabe stayed in the van near the gas pump, and Noah, Jacob and I went into the convenience store.  When Martin was finished getting gas, he started driving the van over towards the store, and Gabe thought he was getting back on the highway.  He cried, “NOOO!!!!  My M&Ms!” 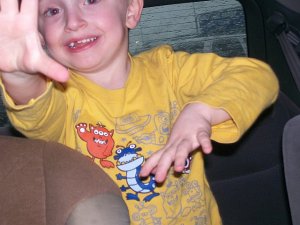 Not, “NOOOO!  Mama!!  The goddess who carried me in her body for 9 months, labored for 12 hours, including 3 of fruitless and excruciating pushing, then had her stretched out but still not terrible looking belly sliced open so they could wrench me out, then fed me, changed me…dresses me, wipes all sorts of fluids off me, plays tedious, repetitive games with me involving hand gestures and getting hit with pillows, waits 10 minutes in the mornings so I can put my socks on BY MYSELF, searches the house for my blanket that looks like pieces from the Shroud of Turin EVERY DAY, Oh Mama!”

No, that’s not what he said.   It’s possible that’s what he MEANT to say.  Just like it’s possible that when I told Noah to turn off his horrific heavy metal music because it was making me want to set myself on fire and he said, “What’s YOUR problem?” he meant to say, “Sorry, I’ll turn it off, and by the way, thanks for making breakfast this morning, going to work so that I am getting a half-way decent education, health insurance, food and a place to live, paying for me to go on a class trip to Washington DC next month even though it’s fear-inducingly expensive, caring about my future, and that whole ‘bringing me into the world with pain and suffering’ thing.  So, yeah.  Thanks.” 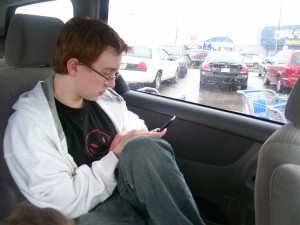 And when Jacob stomped out of the room giving me the stink-eye and muttering at how mean I was for refusing to sign his French horn practice sheet when he didn’t practice the French horn, I’m sure he was planning to come right back and say, “Thanks for driving me back and forth all summer to French horn practice, to track practice, to basketball practice, to my friends’ houses, and to the ten thousand other places I will need to go before I leave home, and sorry for scaring the crap out of you by climbing onto the roof last week and not answering when you called me, and for generally doing things that I know you hate because I enjoy exerting my independence.  Sorry and thanks.”

The thing that makes mothering the hardest in my opinion is not so much all the physical and emotional work involved; it’s the unrelenting guilt.  The pressure to crank out socially acceptable people is like having to build a sculpture out of eggs–one wrong move and your parenting confidence is like Humpty Dumpty who couldn’t be put back together again.  And the strategy that works most of the time for avoiding getting sucked into emotional black holes—just trying to be present with what is—is almost impossible with parenting. The relentlessness of parenting, the looking backwards and forwards all the time, the vigilance, planning, hoping, managing is so NOT about just being present. 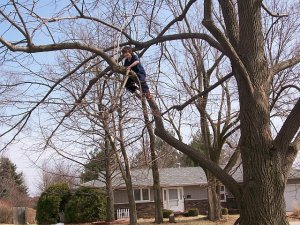 Being present is all about detaching yourself from outcomes, and that is near impossible when it comes to kids, I find.  Being present is so, so hard in parenting because there is always so much else that is going on–not just literally going on–but going on in the sense of always wondering, hoping, wanting to know that your kids are OKAY, that their lives are okay now, and will be in the future–the future that is getting dinner on the table, and the future that is them going out into the world, maybe meeting a partner who loves them, hopefully finding a life they can call their own.

But I’m pretty sure that being fully there to the best of our abilities is what it takes, because kids want and deserve access to our imaginations and pleasures, not our neuroses and beleagurement.  The priest who married us, Fr. Jim McKenna, was an amazing man whose primary ministry was with alcoholics, being one himself.  He had a sign above his desk that said, “Screw Guilt.”  I’ve never been fully on board with this idea, because in some ways, knowing that you will feel guilty for something is useful way to avoid doing it.

But the eating-you-up guilt that does not serve any function at all, the self-absorbed, stuck in your own head, utterly useless to others guilt—well, yes indeed, screw that.  I’m learning that I’d rather be authentically angry or frustrated with my boys than quietly and secretively resentful.  I think they would rather that too, because the truth makes life more bearable, and speaking the truth makes us more resilient and robust.  That is something I would like to give them, and THAT is something that they can thank me for.  Someday.

Today’s poem is by the contemporary American poet Billy Collins.  I recommend listening to it rather than reading it, because hearing it is much, much funnier and more moving; his dead-pan delivery adds so much to this poem, as does the brief intro  it’s really worth listening to here.

The other day I was ricocheting slowly
off the blue walls of this room,
moving as if underwater from typewriter to piano,
from bookshelf to an envelope lying on the floor,
when I found myself in the L section of the dictionary
where my eyes fell upon the word lanyard.

No cookie nibbled by a French novelist
could send one into the past more suddenly—
a past where I sat at a workbench at a camp
by a deep Adirondack lake
learning how to braid long thin plastic strips
into a lanyard, a gift for my mother.

I had never seen anyone use a lanyard
or wear one, if that’s what you did with them,
but that did not keep me from crossing
strand over strand again and again
until I had made a boxy
red and white lanyard for my mother.

She gave me life and milk from her breasts,
and I gave her a lanyard.
She nursed me in many a sick room,
lifted spoons of medicine to my lips,
laid cold face-cloths on my forehead,
and then led me out into the airy light

and taught me to walk and swim,
and I, in turn, presented her with a lanyard.
Here are thousands of meals, she said,
and here is clothing and a good education.
And here is your lanyard, I replied,
which I made with a little help from a counselor.

Here is a breathing body and a beating heart,
strong legs, bones and teeth,
and two clear eyes to read the world, she whispered,
and here, I said, is the lanyard I made at camp.
And here, I wish to say to her now,
is a smaller gift—not the worn truth

that you can never repay your mother,
but the rueful admission that when she took
the two-tone lanyard from my hand,
I was as sure as a boy could be
that this useless, worthless thing I wove
out of boredom would be enough to make us even.

If you didn’t take my advice the first time, LISTEN to the poem here!

4 thoughts on “Motherhood: The “Thankless Job Filled with Fail” Version”