I was cleaning out my office the other day, and I found a copy of a 2004-2005 University of Illinois publication called “The March to the Arch.”  2004-2005 was a huge year for men’s basketball at the University of Illinois, and this publication chronicled the team’s amazing year, which I only knew about because even though I was here at the time, my dad and my friend Ann told me about it.   But really, it was a big huge deal; it was the 100th season of men’s basketball at UIUC, and the team made it to the NCAA National Championship, where they lost to the University of North Carolina 75–70.  They ended the season with an overall record of 37–2, tying the NCAA record for most wins in a season, and a conference record of 15-1.

Well, whatever.  The main thing I remember about that year is that diehard Illini fans really loved this team as a TEAM, that they exuded an incredible spirit when were on the court together.  The only reason I’m thinking about it now is because inside the booklet that I found in my office were two pieces of paper with autographs on them:  Dee Brown’s and Deron Williams’.  When I tell you that I could care less about basketball (or any other sport, really), it’s beyond understatement.  But for some reason, I felt caught up enough in the campus spirit to ask these two young men for their autographs one afternoon when Ann and I saw them standing outside the Illini Union.  Why?  Noooo clue (can you say “fairweather fan??”).

I don’t know why people do this with “famous” people: get autographs or other artifacts that somehow manage to obscure the fact that “famous people” are just human beings, and despite our adoration and/or devotion, we can’t really “get” anything from them.  Also, they are not more than us, nor are we less than them.  When I met David Whyte, it wasn’t as a famous person; I didn’t want to touch him, or to ask him to sign anything, or take a picture of myself with him.  I wanted to meet him as a human being, one who seemed possessed of a particular kind of wisdom that offered a way of looking at the world that was (and still is) deeply interesting to me.  I really, really wanted to talk with him.  And to my still enormous astonishment and gratitude, that’s just what I got to do.

But first I got to introduce him to the 300+ people who came to hear his public talk, and this was an amazing experience.  I wrote the introduction in my head for three months.  Instead of introducing him to the audience, I introduced the audience to him, which is an idea I stole from a former colleague.  When people called to register for David Whyte’s talk, they would tell me things:  where they were coming from, how much his work meant to them, how grateful they were that he was coming to the midwest and they could hear him for free, etc.  I made notes about all of it.

And because David Whyte’s work is very much about connection and conversation, when I wrote the introduction to his talk, I wanted him to know who was listening to him.  I’ve heard him say that when he is speaking to a group, even though he is the one doing most of the talking, he feels that everyone in the room is creating the conversation together.  So it made a lot of sense for him to know who was in the room.  It also made a lot of sense for the people in the room to know that someone knew who they were; i.e., that this was not an event featuring a “famous person,” an event at which they were merely spectators.  It was an event that their passion and desire had helped to create, and I really wanted each and every person to know that.

So I told some stories about where people came from; that they were not just from campus, and the Champaign-Urbana community, but also from towns and cities across Illinois and Indiana; from Quincy and Lisle, Jacksonville and Peoria, Bloomington and Chicago, Springfield and Attica, South Bend and Indianapolis.  A few people came all the way from Minnesota, and five ladies from Springfield arrived three hours early and laid their coats across the seats in the first row right in front of the podium.

I described how people had called me and told me why they were attending: the young engineering professor who works all the hours God sends, and asked, in a voice of pure frustration, “How do I become more patient with my children?”; the therapist with a full-time job and three kids who described his life as living in two tunnels—the tunnel of work responsibilities and the tunnel of home responsibilities; the man close to retiring after a lifetime of work, who said that he did not know what he would do with himself when his job was finished, and was uncertain about how to talk to his wife about his fears.

I said that I believed Whyte’s book The Three Marriages could answer a question all of us are asking: how do we live rich and meaningful lives that seem to be ever-expanding with things that don’t nourish us?  Lives, as he puts it, that are uniquely our own. 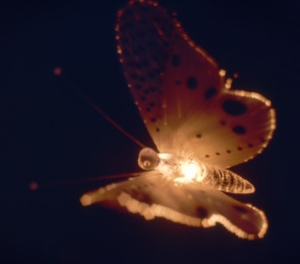 And I’m telling you–standing in that room, in front of those people, handing their own stories back to them, as well as “handing them over” to someone who would honor, value and elevate them–I felt incandescent.

At the end of David Whyte’s talk, one of the Springfield ladies raised her hand and told David how much his poem “The Well of Grief” meant to her, how it had sustained her when a close friend died.  She asked him to recite it and he did; she listened with tears in her eyes, and when he finished, she put her palms together and bowed her head.  And it wasn’t because he was a famous person.  It was because they were two souls who had recognized one another.  It was because for that evening, we could look one another in the eye and say, silently but authentically, “I see you.”

We allowed David Whyte to give that to us.

I had no idea when I started on this topic that it would go on for so long!  I’m pretty sure the next post will get to the actual dinner part, so stay tuned.  The dinner was life-changing.

In the meantime, which poems, writers, books do you feel speak directly to you and your soul?  Please write in and let me know!

I have heard, in that fierce embrace, even
the gods speak of God.