Some Useful Lies About Raising Boys

Maybe this counts as one lie with two parts; I’m not sure.  And just to be clear, the weaponry and the meat are for the boys, not you, though weapons would come in handy, particularly anything with a trapping device.  I feel strongly that even if these two things are not true, someone needs to stand up for them because they seem to cause a lot of pressure and anxiety for parents who frankly, have more than enough to go around.  My advice to people who are fighting the battles of guns vs. no guns, and/or meat vs. no meat is this: give up immediately.  There are so many more important things to worry about, such as why there is never any dirty underwear in your sons’ laundry.

As the mother of three sons, I’ve found that it is helpful to think of boys as primates, perhaps one or two evolutionary steps from dinosaurs (the carnivores): they are loud, graceless and cunning, with tiny, survival-oriented brains.  This keeps your expectations low and your reflexes fast.  One of the ways you can tell boys are primitive is by their weapons–they all do the same two things: hit or shoot.  This morning, Gabe, the 4-year old came into the kitchen with an air-powered rocket launcher that is almost as big as he is and announced, “Mama, I’m the boss of you.  Yes indeed!” 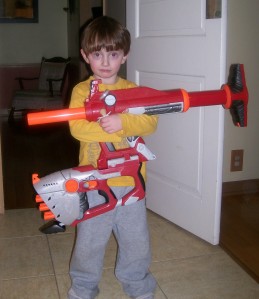 At the same time, my 11-year old was doing what he does every morning: microwaving himself two slices of bacon.  Later, as I was giving the 647th “we don’t use guns, we don’t point guns at people” speech of my parenting career, the 11-year old came over and, chewing a piece of bacon, patted me on the shoulder.  His message could not have been clearer: “Good effort, but utterly futile.”  Then he finished his bacon, put on his winter coat, reached into the pocket and pulled out a fork, which seemed to surprise him.  Gabe shot at him with the rocket launcher as he was leaving for school.

Boys also have primitive eating habits (see bacon example above).  They don’t care what they eat as long as it was once alive.  The last time I saw my sons eat a roasted turkey, I felt like I was watching Henry the 8th–they just ripped off the drumsticks and gnawed at them like they had never even heard of forks, let alone carried them around in their coat pockets.

It’s not like we don’t try.  Trust me when I say that I speak from 14 long years of experience as a recovering vegetarian pacifist politcally correct parent.  For the first year of Noah’s life, we made our own organic vegetable concoctions for him and everyone said what a “good eater” he was–broccoli, tofu, it didn’t matter.  You could puree anything and he would eat it.

Then on his first birthday, almost to the day, he refused, point blank, to touch any of it.  When he was two, my parents, who had been laughing at us the whole time, and threatening to take him to McDonalds when we weren’t looking, asked him what his favorite food was and he said, “meat!”  Then when he started formal daycare and abandoned his lovingly home-made packed lunches for snatching the processed food off of other children’s plates, we gave in.

We still wouldn’t buy him guns, or allow other people to give them to him, so he took to carrying around a spaghetti spoon–one of those spiky things that you scoop spaghetti out of the pot with.  He wouldn’t leave the house without it for years, until we got a little note in his cubby at daycare that said, “Please do not allow Noah to bring his spoon with him anymore.  This afternoon he hit a teacher with it.”

Martin, my husband, is a therapist who spends a lot of time thinking about issues related to men and boys.  Despite being a total pacifist, he recently told me that pretending to shoot guns is developmentally important for boys because it’s about “projecting yourself into the future.”  This is interesting, but to be honest, I don’t really care anymore.  I’m tired.  I’m tired of everything about parenting having to mean something, to stand for something, or to be based on the fear that it means the wrong thing.  I hate when I go to the library to look for books for Gabe and there are a gazillion lesson-oriented books (how to poop, why you shouldn’t lie, teeth are not for biting, etc.) and so few really good stories.  I hate that people tend to be afraid of boys and their energy, even though I am usually afraid of my boys and their energy.

Today’s piece of literary material is one of my favorite quotes about boys: “Every genuine boy is a rebel and an anarch. If he were allowed to develop according to his own instincts, his own inclinations, society would undergo such a radical transformation as to make the adult revolutionary cower and cringe” (John Andrew Holmes).  So as the mother of three boys, I am aligning myself with rebellion and anarchy, such as it is, even though it is part of my job to be the one they rebel against.  But for now, let them eat meat.  I will do my best not to allow what I think they should do or be to block my vision of what they really are.  And I will also do my best to stay out of the way of the rocket launcher.

And FYI for anyone who has never heard or read this, here is one of the most hysterical essays on parenting of all time: “Lamentations of the Father,” by Ian Fraiser.  You can read it here and listen to it here.

16 responses to “Some Useful Lies About Raising Boys”