One of the books that has been, to steal a phrase from Jennifer’s comment on yesterday’s post, an oxygen mask for me lately is The Artist in the Office: How to Creatively Survive and Thrive Seven Days a Week (or AITO for those in the know) by Summer Pierre.  AITO started out as a handmade ‘zine, motivated, as I understand it, partly by boredom and frustration, and partly by the desire to speak to everyone who feels like they are living two lives: their “wage slave” life and their creative life: “Day after day, this is how it goes: You get up, go to work–and save your ‘real’ self for the cracks and corners of your off time.  Your 9-5 work might pay the bills, but if it’s not giving you an outlet for your pent-up creativity, it’s time to make a change” (from the back cover).  The ‘zine was a hit, and is now a real live book, available on Amazon and other real live book selling places.

What I love about this book is that it is NOT about abandoning your day job.  It’s about “integrating the work you have to do with the work you want to do.”  It’s about making the office an object of creativity, about valuing, in real and specific ways what your day job provides for you, and about not getting stuck in the sinkhole of “I-Hate-Where-I-Workville.”  It’s not preachy or fake positive-thinking-ish; it’s genuine, doable, and written by someone who has been there.  And it’s funny.

Sprinkled throughout the book are various ideas and “Try This” items.  (The one I most want to try but don’t have anyone to do it with is to “find someone at work, preferably someone just as bored as you.  Every time you see each other, start to dance”).  But the ideas aren’t just goofy; they’re interesting and potentially inspiring, so two weeks ago I decided to try one out.  The one I chose is:  Be a Secret Messenger for Good (and despite the fact that I am writing about it here, it will remain a secret because none of my co-workers read this blog, at least not as far as I know).

The instructions for Being a Secret Messenger for Good are to take “hopeful, inspirational, motivational, positive messages and/or quotes, and put them in secret places are your office.  Examples: inside cabinets, on whiteboards or flip charts, and inside bathroom stalls.”

This idea actually made me excited to go to work.  I printed out the quote, “You are always on your way to a miracle” (SARK), and secretly taped it to the paper towel dispenser in the women’s bathroom.  I checked on it periodically and was pleased to find that it stayed there all week, quietly inspiring (or confusing) all the women who were drying their hands before returning to their labors.  So I felt hopeful, and the next week, I took it down and taped up “All your problems are taken care of” in its place, and even added “Keep up the good work!” on the inside of the cabinet door in the break room.

As the days passed, however, I felt concerned that the areas for quote placement were limited, especially because I only had access to the women’s bathroom, and would therefore only reach part of my office population with this project.  So I considered my options for getting into the men’s bathroom (waiting until after 5:00, asking a male student to go in there with a quote and some tape, enlisting a trustworthy male colleague), and decided to share my secret with a male coworker and ask for his help.

He loved the idea, and after a whispered conversation, we decided he would tape “You are always on your way to a miracle” on the inside of the door to the men’s bathroom so that men would see it as they were leaving, as they were, “on their way,” so to speak.  We did consider taping “All your problems are taken care of” inside one of the stalls, but decided that, as that might not be the case in that particular location, we would save that one for another spot.

I felt very excited, and a few minutes after our conversation, received an email that said “Mission accomplished.”  But later that afternoon, I received a second email with the subject line: “a disappointing start.”  The quote hadn’t lasted the day.  My colleague found it crumpled up in the bathroom trash can that afternoon.

The location of the crumpled up quote means that someone (some MAN) would have been walking OUT the door of the bathroom, seen the quote, torn it down, turned AROUND, walked back to the bathroom trash can, crumpled it up and thrown it away.

My mother did not seem surprised by this when I told her about it on the phone last night.  “That’s the difference between men and women,” she said.  “And some people are just angry.”

But I felt surprised.  And confused.  I didn’t really think anyone that I worked with was THAT angry.  So in order to continue this project, I need to figure out the source of the problem.  Here are some of my initial questions:

Clearly I need more data, so next week I am going to ask my male colleague to post this quote that I got from my friend Barbara’s blog: http://lastyeartolive.wordpress.com/:  “There are only two ways to live your life.  One is as though nothing is a miracle.  The other is as though everything is a miracle” (Albert Einstein).

My sense is that engineers will think twice about tearing down a quote by Einstein and will have to overcome a slight pang of internal guilt before crumpling that one up.  (My mother lewdly suggested a bathroom quote with the words “keep” and “up” in it, but we don’t talk like that on this blog so I can’t tell you the whole thing).

If the Einstein quote doesn’t make it, though, I may have to find some quotes about how great and important to society engineers are, and what an interesting piece of diagnostic information that will be if those survive the bathroom posting.

Today’s poem is about work, and I love the last two lines: “The pitcher cries for water to carry/and a person for work that is real.”  As Gabe would say, “Yes indeed.”

To Be of Use

The people I love the best
jump into work head first
without dallying in the shallows
and swim off with sure strokes almost out of sight.
They seem to become natives of that element,
the black sleek heads of seals
bouncing like half submerged balls.

I love people who harness themselves, an ox to a heavy cart,
who pull like water buffalo, with massive patience,
who strain in the mud and the muck to move things forward,
who do what has to be done, again and again.

I want to be with people who submerge
in the task, who go into the fields to harvest
and work in a row and pass the bags along,
who stand in the line and haul in their places,
who are not parlor generals and field deserters
but move in a common rhythm
when the food must come in or the fire be put out.

The work of the world is common as mud.
Botched, it smears the hands, crumbles to dust.
But the thing worth doing well done
has a shape that satisfies, clean and evident.
Greek amphoras for wine or oil,
Hopi vases that held corn, are put in museums
but you know they were made to be used.
The pitcher cries for water to carry
and a person for work that is real. 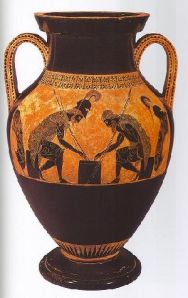