For I Know the Plans I Have for You

Just in case a prestigious institution (or any institution, really), came knocking on my door looking for a commencement speaker, I’d prepared a few notes for the graduates of 2011.  But graduation has come and gone, just like those “Congratulations!” cards at Walgreens which graduates hope contain money.  (When my brother “graduated” from 8th grade, we caught him in a corner at his party, opening the envelopes and then shaking the cards without reading them to see if there was cash inside).   I could never give a good graduation speech, though, because Maya Angelou already gave the best one ever here in Illinois in 2002.  She sang; it was magical.

In my job working with students, however, it is helpful (for my sanity) to remember how amazing people who are mostly fully formed are, how much potential they have, how much we can learn from them.  It helpful because on a lot of days, I want to smash their hands in my office door.  Just this month alone I’ve been lied to, yelled at, insulted, sat too close to, sneezed on, and told about 785 stories of dead grandparents, usually in far-off lands to which the students must flee immediately, thereby missing all of their final exams.

The one observation that remains consistent for me is that, regardless of brains and privilege, it is not an easy job to make your way in the world these days.  Pressure is enormous, confusion about how to be one’s self rampant.  I would not want to do it.

Shortly before I left home to go to college in 1985, I overheard a conversation between my parents in which my father was reassuring my mother about me leaving home (which I could barely wait to do) and being with people they didn’t know, having experiences they couldn’t control, etc.  He said to her, “She’s going to be around people who are exactly like her, from the same kind of background.”

I was horrified; to me, I was going off into the world, breaking free, when in fact he was exactly right.  Villanova University was not a hotbed of diversity.  I lived in same-sex dorms.  We had curfews.  Priests were there.  On graduation day, every single father was wearing the exact same navy blue blazer, yellow tie, and tan pants.  But the safety of that experience gave me the chance to figure out how to be myself with more gentleness and less worry than I see on the faces of many of my students today.

So if I were to tell any graduating person anything, it would be first this: “‘For I know the plans I have for you,’ declares the Lord, ‘plans to prosper you and not to harm you, plans to give you hope and a future”  (Jeremiah 29:11).  This is such a comforting, exciting, and hope-filled passage.

And then I would read them this poem below, written in the 1970’s, at the height of Communist Russia, by a 17-year old boy trying to live his life differently from others.  Trying to be himself.  Announcing to the world, every morning, “I am not afraid;” perhaps, like us, sometimes, announcing it over and over until it becomes true, “I am not afraid” to be who I am meant to be.

Today, as many times before,
the sun has lit a streak of fire in the sky.
But in the morning of the new day,
I am pushed from the hastening trolley bus
like a cork from a bottle.

Men and women love the dawn for its freshness,
for its promise of new beginnings.
In the morning, therefore,
I am not frightened
that I have chosen to live a life unlike that of
other young men. 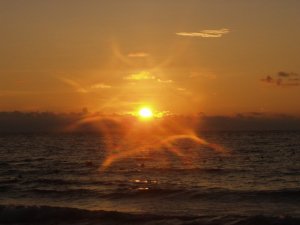